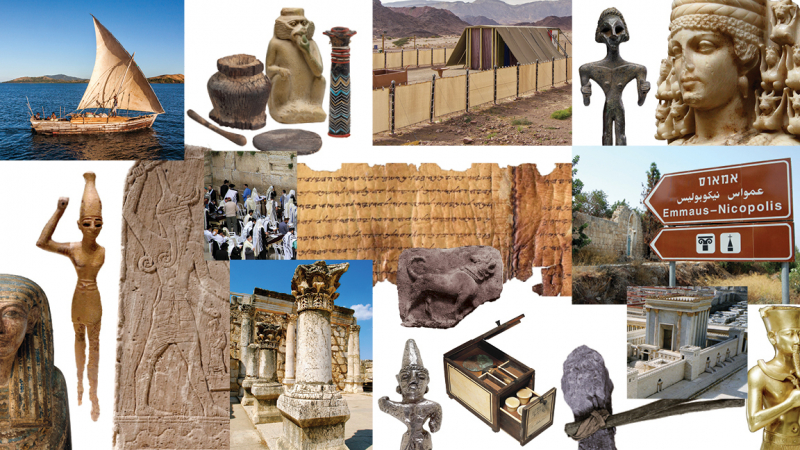 Have you ever had the good pleasure to get to walk backstage in a theater? To walk among all the ropes and curtains, to see the backs of the sets and pick up miscellaneous props? It is a magical experience, and you end up appreciating the production even more. Or undoubtedly you have rummaged through the bonus disc from a favorite movie and dug deep to uncover all of the “Easter eggs” that were hidden in the movie. Like the R2-D2 and C3PO hieroglyphs on the wall when Indy first discovers the Ark of the Covenant, or when Rapunzel and Eugene from Tangled attend the coronation in Frozen. And don’t even get me started about all of the Pixar eggs.

In the spirit of uncovering eggs and peeking behind the curtain, I would like to take you through the pages of the new Journey Through the Bible to help you catch some things that you might miss when your copy arrives in the mail.

I have been designing the Veritas Press catalogs ever since they began, and I can remember many of the cool books we added over the years that earned the glorious five-star endorsement. But I am hard-pressed to think of a title that deserved it more than Journey Through the Bible. It was an unparalleled reference work that allowed the reader to follow the narrative from Genesis to Revelation and discover how ancient people really lived—the foods they ate, the homes they lived in, the clothes they wore, and the work they performed. It had dozens of colorful maps, reconstructions, and diagrams. It boasted photographs of archeological discoveries and the Bible lands today. True, it wasn’t a perfect fit for the Veritas Press Bible flashcards, but it was still pretty fabulous. The book was included in every catalog, and I know my wife bought at least one copy of it for our kids while we were homeschooling. Then over the years there were rumors that it was going to go out of print, then it did go out of print, but Veritas was able to buy up the final cartons. And then the dark day arrived that Journey Through the Bible was finally gone.

Fortunately, when the Detweilers love something, they love it deeply. And Journey Through the Bible was loved, so having it simply fade off into the sunset was not an option. They were tenacious in reaching out to the publishers and worked tirelessly to bring it back to life. I can still remember the exuberant call I got from Laurie telling me that Veritas was given permission to bring the book back into print.

Alas, there was a slight problem—much of the artwork from the original book had been lost and I would need to design the book almost from the ground up. Was this really a problem? I was thrilled, because I was given all the maps and the brilliant content, yet I had the joy of rebuilding it. But like in the Bionic Man, I was committed to making this edition of Journey “better . . . stronger . . . faster.”

The first thing we did when redesigning the book was to sync it up with the Veritas Press Bible flashcards. It isn’t a huge thing with the space taken on the page, but it is going to be a giant help when people who are using the Veritas cards are looking to study more of an account from Scripture. And for those book design geeks in the audience, I switched up the typography to create a more elegant page layout; but more importantly, I selected a new typeface for the text that has a larger x-height than the earlier edition. What does this mean practically? It is much easier to read.

Moving on to the really fun stuff, as I said, I needed to gather almost all new art to adorn the pages. The guidelines in my mind when looking for new photos and illustrations were: 1) try to replicate the strong images from the first book; 2) find new images that highlighted ideas in the text which hadn’t been focused on in the first edition; 3) look for fine art that would help tell the story of the Bible beautifully. One of the things I loved about Veritas Press from the moment I began designing for them was their embrace of Beauty. And I think this new edition of Journey Through the Bible might just be their most beautiful publication yet.

Ahh, but I promised you Easter eggs! I won’t reveal them all, but here are some things I wove into the design of the book that I think add depth and beauty to the book . . . and they’re just pretty cool.

Cover: The Great Isaiah Scroll—one of the seven Dead Sea Scrolls that were first discovered by shepherds in 1946 is on the front cover and on the back cover art illustrating the scope of Scripture: Creation, Fall, Redemption, and Consummation. Will most people pick up on that? No, but it’s in there!

Divider Pages: Sure, the camel and the boat were nice in the first book, but in this new version there are fine art sculptures of Moses and the Good Shepherd, along with captions that set the stage for each section theologically. Was that really necessary on mere divider pages? No, but it is pretty cool.

Tower of Babel: Instead of drawings and models, the new edition has famous art of the Tower along with a photograph of the ziggurat that was uncovered which some believe may have been the ancient tower!

God’s Covenant with Abraham: A photograph of a clay tablet that was a real Assyrian covenant.

A Bride for Isaac: examples of real rings like Eliezer gave to Rebekah from around that time that are in the collection of the Metropolitan Museum of art.

Jacob’s Ladder: a photo of ruins from a chapel dating to the time of the Crusades, built next to the site that Jewish tradition says is the place where Jacob had his dream.

Joseph in Egypt: An ancient Egyptian signet ring like the one which Pharaoh gave to Joseph and a model of a granary found in a royal tomb showing the types of buildings Joseph ordered to be filled during the seven years of plenty.

Moses: an actual Egyptian brick mold found in the ruins of the Temple of Hatshepsut, Egyptian cosmetic cases, Egyptian sandals woven from papyrus, palm leaves, and grass, and (when discussing the Ten Commandments) a statuette of Amun—one of Egypt’s most important gods—and a photo of the path today that leads up to Mount Sinai.

Judges: actual Baal idols (bronze, silver, and bas-relief in stone), a Canaanite jug similar to those used by Gideon to cover the torches, a recreation of the tabernacle, photos and 3D renderings of the ark of the covenant.

David: Photos of Bethlehem, a sling, arrowheads from the time period like Jonathan carried, the cave where David and his men hid, the Tomb of Absalom, and a model of the temple of King Solomon that was built in 1883 as the centerpiece of an Anglo-Jewish Historical Exhibition in the Royal Albert Hall.

Nativity of Christ: Wondering what the Temple looked like back then? Caesar? The writing tablet of Zecharias? Mangers? Caravans? Carpenters tools? Yep, got photos of all of those.

Life and Ministry of Christ: In addition to photos of where Jesus was baptized, was tempted, the synagogue where he preached, Jacob’s Well, the mount of the Sermon on the Mount, and where Peter lived, I made a really cool pile of coins. Sure, it sounds boring, but the currency is all from the time of Christ and you get to see both sides of the coins, and I pulled them from about a dozen different sources. You may end up not being impressed, but I was pleased with myself! What you might find fascinating is seeing the jail where John the Baptist was held and looking at a fishing boat that has been uncovered from the Sea of Galilee that dates to when Jesus was sailing across the Sea of Kinneret. But what really delights me is the photo of a modern road sign to Emmaus-Nicopolis. Did Jesus see it in his day? Of course not, but all my life I have heard about the “road to Emmaus,” and the fact that there is an actual ROAD SIGN makes me chuckle each time I open to that page.

Epistles: There are a lot more photos of locations in this section of the book since we know where Paul visited, and there is a glorious photograph of the goddess Diana that caused such a fuss, and a photo I particularly loved to see the place where Lydia was baptized.

Obviously, in a book that is over 400 pages long, there are many more things I could comment on. For example, I hardly mentioned all the bunches of glorious paintings of Biblical events from museums across the world. Journey Through the Bible was a great book, and now it is even better. I encourage you to take a look.