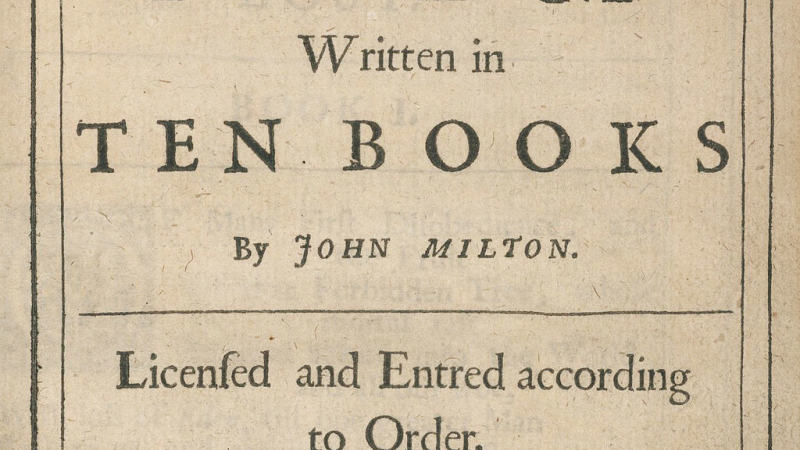 For many years, I have had the privilege, and challenge, of starting my Omnibus class reading Milton’s Paradise Lost. It is a great, maybe ideal, book with which to begin the study of the modern world. William Blake asserted that Milton unwittingly made Satan the hero of Paradise Lost. Although I disagree with Blake, there is something to his charge, Satan is the most interesting character. He dominates the action. Milton’s Satan is model for all modern anti-heroes: self-made, self-worshipping, demagogic. He would rather “rule in Hell than serve in Heaven.” He is doomed. He has rebelled against the Almighty. He has no chance, but still he won’t give in. There is something that Americans love about this sort of prideful stubbornness, but we should not. Milton does not want us to admire his great villain. Paradise Lost teaches to love what is good and hate what is evil. That is a very practical lesson. I know that Paradise Lost is not the easiest book. This post is not going to disguise the challenge of reading Milton; Instead, I will give you three reasons why it is worth reading in spite of and because of this challenge.

These are three practical reasons to read Paradise Lost.

Milton’s stated goal is “to justify the ways of God to man.” He wants to demonstrate that God is faithful and good—even when He appear to be the opposite. If we could believe this one point: that God is good and right, we should be well on our way to faith. Wisely, Milton finds the most important time in history to have faith—the Fall. How can we trust a God who allows His innocent creature to be tempted and fall into sins and destruction? If we can see God’s faithfulness at this point, all of the other dominos should fall and we should be able to trust God at every other point. Why is this?

The Fall is the most crucial point and the most difficult point to trust God, and Milton knows it! He takes us to the most crucial point of the battle of faith knowing that if he can win this battle, he has won he entire war. Books 2 and 3 of Paradise Lost are some of the most troubling words penned. In Book 2, the demons in Hell propose how they can take revenge on God. After debating three plans, Beelzebub, Satan’s mouthpiece, proposes the most sinister plan. He knows that they have no chance of attacking God directly, instead they should attack his new creation: mankind. I sum this up saying that this plan should be called: “Kill the Children!” And so, Satan ventures out to destroy Adam and Eve. Book 3 gets even worse. In it, God the Father and God the Son watch Satan approaching the Earth…and they do nothing. In Milton’s story, God could have stopped the Fall…but He did not. It is like a father seeing a threat coming toward his child and deciding not to stop the killer as he approaches the home.

Tough stuff, but if we can trust God at this point, we can trust Him at all others. Here’s why, terrible things often happen today, but they happen in the context of sin. When tragedies occur in our day, we can know that our world is a cursed world that is in rebellion against God. Eden was not so. God surveyed it and called it “good”. Adam and Eve where not rebels deserving judgment. As the story begins, they are God’s sinless children. If we can trust a God that allows temptation and sin to enter a sinless world, then we can trust a God who curses a sinful one like our current world.

Remember, Milton hopes that you finish his book and say: God is just. In Book 3, he begins his defense. As Satan approaches earth, the Father announces that man will fall, but He also claims that man will be redeemed. But how? This is where we start to see Milton’s case for God’s justice taking shape. The Son exclaims,

Behold me then: me for him, life for life,

I offer: on me let Thy anger fall,

Milton’s defense is not just that man deserved judgment when he sinned. Obviously, when we suffer because of our own sin, we should confess and admit that we deserve the evil that we bring on ourselves. Adam, however, is not us—he is not sinful. Still, God lets him be tempted and fall. Milton’s defense is deeper. God is just because whatever we suffer, Jesus is willing to suffer to redeem us. He goes into the room with justice meant for us and takes upon Himself the wrath of His just Father. One of my students this year said, “You have to look at the long game.” Yes, precisely. Milton is attempting to cause you to see the Fall in the context of the Cross. God allows the Fall and then the Son redeems His people on the Cross. Milton works to get us to a God we can trust… and love.

We wish that we could live lives without heartache or mourning, but that is not world we live in. We need to have a faith that sees and believes in a God that plays the long game. When we mourn at the grave of a family member, when we are the betrayal of a friend, when we see all our efforts unravel and break; we need to know Milton’s God: one who is fully in control and who will stand with us in it. We need a High Priest who can sympathize with us. Jesus is that High Priest. He knows what it is like to be abandoned; He has felt betrayal; He suffered like we could never suffer—because He chose all of it and deserved none of it.

You will have to live through this sort of suffering someday and you will need this High Priest in that day. Friends will fail you. Evil will come and crush your work. Those who know Milton’s High Priest, the one who says, “me for him” can know peace even amidst suffering and loss.

BUT, read it slowly, thoughtfully, and (preferably) in a group. I gain so much each year from reading this book with students. If you are not so blessed to be a student, become one, and find a fellow student or two to form your own little Omnibus course and work your way through Paradise Lost.