The Lodmell Family: Our Veritas Story 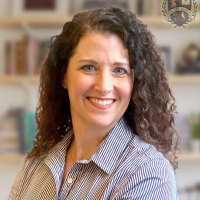 Thirteen years ago, I sat across the table from my husband at bustling tavern in an Ivy League college town. “How many will you bring in for an on-site interview?” I asked. I had accompanied him on a recruiting trip for his company. That fall day, he had interviewed fifteen students, all who would be graduating the following spring. He had given them each a “case interview”, where they were given a problem (mathematical in nature) to solve. If they got stuck, he would prompt them, nudging them gently toward an answer. These were real-world problems like one would encounter in business, where you have to think about cause and effect, human behavior, and how changing one variable might change three others. In other words, use what you learned in school, coupled with logic and common sense, and then justify your answer.

“None,” he replied. “Not one of them could pass the case.”

I just sat there, flabbergasted. “What do you mean, none? Not one single candidate?”

“Yep. It’s like these kids don’t know how to use their brains.” He was actually visibly dejected. He relayed to me how the candidates responded to him with phrases like, “Oh, this wasn’t in the textbook,” or, “My professors never taught me that.” He would try to encourage them by saying, “That’s ok, let’s just think logically about this…” but they had seemed completely baffled by his questions, as if he spoke another language entirely.

“Crissy, all I know is that we have to do something different with our kids.”

We had brought our 4-month old daughter, our youngest of four, with us on the trip. She was sleeping in her infant carried in the booth next to me. I thought of our other three children at home, ages 2, 4, and 6. The oldest was in first grade at a small, classical, university-model school we had stumbled upon locally. He only went to school two days a week, and on the other days, we “homeschooled”. He was doing second-grade level math in first grade and he was starting to memorize all sorts of dates and facts about major events in history and in the Bible, starting with Creation. His reading curriculum was phonics-based. We had been required to order all of his books beforehand, and I actually had to call one specific company to obtain several components. Of course, that company was Veritas Press. I had never heard of Veritas, or classical education for that matter, but I loved having my little fella home with me “doing school” most of the time while someone else “held the reigns.” I was thrilled with the arrangement. It wasn’t until much later that I realized that this “classical education” was exactly what my husband was talking about, and we had already planned for all our children (including that little baby sleeping next to me) to follow in the footsteps of the oldest.

We continued in this manner for the next four years, until a job change and relocation took us to a smaller town where a comparable option didn’t exist for us. By this time, I was definitely on the Veritas mailing list, receiving that beautiful catalog every spring. It was time to take the plunge and homeschool on my own.

We knew from our prior experience with the history and Bible cards that we wanted to continue with them, and our younger children were ready to start history as well. Veritas had just released self-paced history classes at the grammar school level — perfect timing! It was a perfect fit for us - I could teach math and phonics and the other subjects I love to teach, while outsourcing history each day. We fell in love with the self-paced classes. Over the course of the next seven years, I purchased self-paced history classes thirteen times.

But what happens after the grammar years? I was already thinking ahead and poring over the catalog. What was this “Omnibus”? Where was just plain old “history”? I dug into my well-worn, now dog-eared, catalog and realized that this was where I wanted my kids to end up — in Omnibus classes. So, we charted a path to get there. We enrolled our oldest in the History Transition live online class in 6th grade. The next year, he took Omnibus Primary and Secondary, along with Latin and Logic online. By 8th grade, he was taking a full course load online (six classes), we were seriously thinking about the diploma program for him, and we had made plans to attend the End of Year Gathering in May.

In retrospect, it’s easy to see the hand of God in guiding us in the education of our children. I joked, when they were little, “I sure hope God doesn’t call me to homeschool my kids. I’m excited for them to get on the school bus and head off to school!” Doesn’t God have a great sense of humor? One thing my children have never done is ride a school bus (sorry, kids). By the time our oldest was four years old, I was thinking maybe I didn’t want him to be gone five days a week. I actually really enjoyed him and maybe just needed a little assistance in educating him. Years later, our move caused me to take the leap of faith and homeschool full-time. Self-paced classes were released right when we needed them. The History Survey and Transition live class landed in my lap as the perfect option to prepare for Omnibus!

It’s amazing to be on the other side of this journey with one child (while still in the midst of it with three others). The aforementioned oldest is now in the honors college at Clemson University studying architecture with a minor in political science. Last fall, he called me to tell me that he was reading Plato for his Intro to Political Theory class. “Mom, I’m getting so much more out of these books the second time around! They were not intended to be read just once!” To me, this is the mark of a lifelong learner — someone who sees the value in reading and rereading. This was a goal for our children.

Our journey has not always been easy. More than once, my husband and I have laid out the pros and cons of “just enrolling in public school”. We have taken turns playing the devil’s advocate role. In every instance, though, we have circled back to where we are, how far we have come, and what lies ahead. Our children have learned some truly hard lessons during these school years. They have seen both the short-term effects and the long-term consequences of their actions, partly because of the continuity in their education due to our close parental involvement. We have felt so fortunate to walk alongside them through their trials as they continue on that trajectory toward independence from us and dependence on God. An added benefit is that we are getting to be lifelong learners, too! It’s hard to tutor your child in physics unless you brush up on your physics! One of my children needed a great deal of support in chemistry, so I learned chemistry alongside her. What a privilege to learn alongside my child, and for her to solidify her learning by “teaching” me.

Veritas Press and Veritas Scholars Academy have taken my children from Kindergarten all the way to where we are today (one in college, two in high school, and one in middle school). The year we had our children in 23 live online classes, God provided. I was able to put my degree in education back to work and teach Math 4 for Veritas. The next year, I moved to Algebra I and there I found my happy place, working with middle and high schoolers (who are amazing!) in Algebra I and Algebra II. Our school is full of extraordinary students, but also ordinary students who are extraordinarily hard workers. My colleagues are the most intelligent AND most faithful bunch of people I have ever met. They pour Biblical truth into each of their students unreservedly through every stage of their learning — from grammar to logic to rhetoric.

I have watched my own children tackle difficult subjects, argue topics they felt passionate about, and even defend stances they disagree with. They have sought out answers to hard questions and learned discipline along the way. It is our hope that they are never find themselves saying, “That wasn’t in the textbook,” or, “My teacher never taught us that,” but rather that they would say, “I don’t know, but I will find out,” or, “Logic would say this … and I’m able to argue my point.” If they’re right, fantastic; if they’re wrong, hopefully they have learned something in the process.

When our children head out into the world, they are equipped. They are able to think clearly and reason persuasively (they practice “persuading” all the time!). They possess the Biblical lens that we pray they will use as they are making their own decisions. The mission of Veritas, “Restoring culture to Christ one young heart and mind at a time,” is truly being born out in our family.