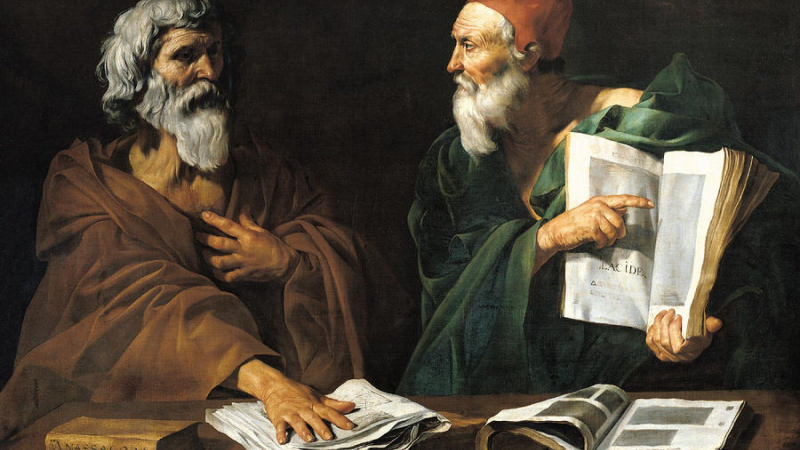 In Omnibus VI Secondary, students are asked to consider the question “Can pagan books help us understand truth? Can they help us understand the Bible?” Below is Alisa Stringer’s response essay to the topic. To learn more about our Live Online Classes click HERE.

Every Christian has an obligation to seek truth and to share that truth with others. An isolated Christianity, where believers are concerned only with those who already believe and in reaffirming only what Christians already know, is not a Christianity that is learning to love others for God’s sake. Every person is a reflection of God’s image, distorted though that image be. To seek truth and understand where secular works fall short of truth, is to understand God better, to love Him better, and to love His creation more. Christians should engage with their culture, and with the literature of the past, in order to reach people who study and love that culture and literature. In the understanding of secular books, either a Christian will learn more about their awe-inspiring God and the wonder of His creation or, a Christian will learn more about the sin of man and the result of sin. In either case, the result is edifying. It is the duty of followers of Christ to study and understand secular books.

A Christian is not all-knowing. If a piece of literature presents information that a Christian did not before consider it does not matter who produced the literature. Information should be weighed based on its validity, not simply on its source. For example, if a scientific text presents new discoveries of which a believer was not before aware, the believer has a duty to study the text. Science is the study of God’s world, whether or not scientists assert that truth. Therefore, any discoveries that are made are indicative of the greatness of God. Scientific laws, mathematical rules, and physical phenomena are not created by man, but discovered by the same. As Saint Augustine writes, “Let every good and true Christian understand that wherever truth may be found, it belongs to his Master” (53). In the same way, the study of logical sequences is a fitting undertaking for a Christian. Logic exists outside of man, he is only an observer. If man is not the originator, then logic is put in place by God, which means that believers should attempt to understand it. “The validity of logical sequences is not a thing devised by men, but is observed and noted by them that they may be able to learn and teach it; for it exists eternally in the reason of things, and has its origin with God” (Augustine, 68).

While the study of science and logic is good and wholesome, the conclusions that scientists and logisticians reach are not always correct. The study of such topics requires discretion. In addition, it is necessary to seek out good topics of study, while avoiding harmful subjects. The study of astronomy is fulfilling and useful, as it teaches about the vast expanse of God’s creation and his Divine creativity. However, the study of astrology, in order to predict the outcome of individual’s lives, is not edifying. Knowledge must be sifted. For this purpose, Augustine does offer a necessary warning to his readers, “Accordingly, I think that it is well to warn studious and able young men, who fear God and are seeking for happiness of life, not to venture heedlessly upon the pursuit of the branches of learning that are in vogue beyond the pale of the Church of Christ, as if these could secure for them the happiness they seek; but soberly and carefully to discriminate among them” (73).

It is also necessary that a Christian study secular books in order to correct misconceptions that people around him may hold. Historical studies provide enlightening information about the time and culture surrounding portions of Scripture. Many of the New Testament letters were written to specific churches. Secular sources provide information on the churches at Rome or Corinth, which make the situations that these Christians were facing seem much more real and relatable. Scripture is not just for us to interpret as we please, with whatever situation we are facing. The histories, poetries, and letters of the Bible have significant historical meaning. Without secular histories, much of that meaning can be lost on modern Christians. Secular histories can prove practical tools for correcting understanding the context of Scriptural passages.

In addition, if believers do not understand the natural world, or fail to study the history of the human world, they are unable to defend their faith from people who do not believe in the same God. Augustine uses the example of Ambrose correcting Platonists who believed that Jesus Christ drew his teachings from Plato. It is true that chronologically speaking, Plato lived before Christ. However, as Augustine explains, it is actually more probable that Plato was influenced by the texts of the Old Testament. As secular historical accounts teach, Plato and Jeremiah were in Egypt at the same time. This suggests that Plato could have been introduced to the Hebrew texts, which would influence his philosophy. “When we reflect upon the dates, it becomes much more probable that those philosophers learnt whatever they said that was good and true from our literature, than that the Lord Jesus Christ learnt from the writings of Plato” (Augustine, 64). Thus, it is clear that knowledge of secular history can be used in order to defend the Christian faith. Similarly, there is a certain benefit to studying secular philosophy and morality. An understanding of the most pervasive thoughts of secular leaders allows Christians to effectively combat mistaken philosophies. In Acts 17, Paul encounters Epicureans and Stoics, the great philosophers of his day. In order to correct and instruct the Greek philosophers and to explain the wonders of the gospel, Paul references well-known philosophers of that age. “For in him we live and move and exist. As some of your own poets have said, ‘We are his offspring.’” (New Living Translation, Acts 17:28). In doing so, Paul establishes credibility and empathy with his audience. The effect is clear. “Some joined him and became believers. Among them were Dionysius, a member of the council, a woman named Damaris, and others with them.” (Acts 17:43). To effectively defend the Bible, it is useful for Christians to have an understanding of secular philosophies and histories.

It is the duty of Christians to study secular works because these works shine a light on the world of man. While we are citizens of the city of God, we currently reside in the city of man. It is our responsibility to learn what we can, and reach who we can, while we are here. To learn about the fallenness of man is to understand more a need for a savior. To understand the truth and goodness reflected in the world is to love the Savior more. It is therefore essential that Christians understand works of literature, politics, philosophy, and science, despite the fallen sources. Yet, with these fallen sources, a Christian must remember to keep his focus on the one source of absolute truth, God. “For whatever man may have learnt from other sources, if it is hurtful, it is there condemned; if it is useful, it is therein contained. And while every man may find there all that he has learnt of useful elsewhere, he will find there in much greater abundance things that are to be found nowhere else, but can be learnt only in the wonderful sublimity and wonderful simplicity of the Scriptures” (Augustine, 42).

Alisa is a high school senior who will be attending Luther College to study Chemistry and Anthropology next year. She has been a Veritas student for the past three years, a debater for the past six years, and a literature lover since she was born.