In the Classroom: The Cellular Respiration Story by Carley Thomas 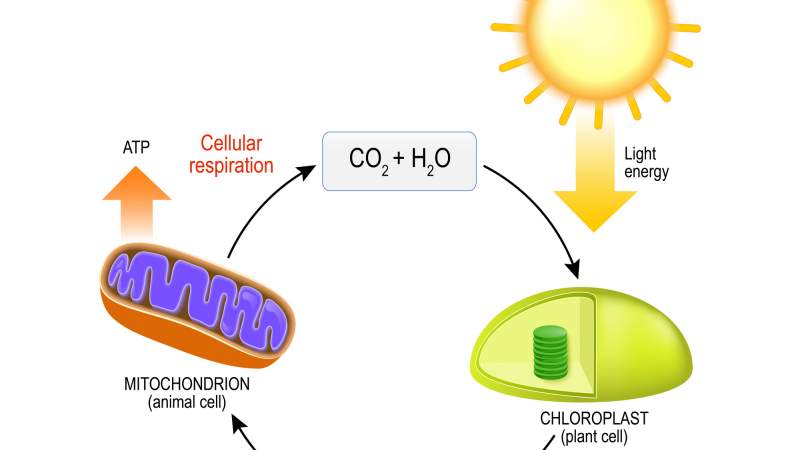 One of our Biology teachers, Melissa Teply, is a firm believer of teaching new and difficult concepts in story form so that it is entertaining and easier to remember. When Cellular Respiration comes around in Biology and Anatomy and Physiology, she makes it a point to tell “The Cellular Respiration Story”. The students then break out into groups to write their own version of the story. Below is Carley Thomas’s version.

Once upon a time, there were three groups of elements, and their group names were “The Carbon Conundrums”, “The Odd Oxygens”, and “The Hallucinating Hydrogens”. They decided to join together to become one group, and they voted to call themselves “The Glucose Gang”. One sunny, October day, they decided to take a trip to Cell-City, and enjoy themselves for a while. When they got there, they all wanted to go shopping for some delicious phosphates, for they had heard from “The Hallucinating Heliums” that the phosphates in Cell-City were absolutely wonderful. As they walked around the outdoor market, they saw a small booth with a sign reading, “Free Phosphates! Get em’ while their hot!” The Glucose Gang, thinking they were very lucky to have found free phosphates, walked over to the booth and asked if they could have some of the phosphates. Unfortunately, the shop owners, Mr. and Mrs. ATP, only had two phosphates left. Even though they were disappointed, The Glucose Gang took the shop’s last two phosphates. As soon as they acquired the phosphates, the gang members began arguing amongst themselves over who was to have the phosphates. They got so angry at each other that they split apart into two groups, each taking one of the two phosphates, and they stomped off in opposite directions.

As the two groups continued through the market, two other shop owners, ATP Jr. and ATP Sr., ran towards them, offering each group another phosphate and saying that they had found some in the back of their shop. They were walking around proudly holding their two phosphates, when suddenly a car with a bunch of NADs came around the corner and asked the Hydrogens if they would come with them to the big element party over at the Electron Transport Chain. Two of the Hydrogens thought a party would be great fun, so a Hydrogen member from each group left and went with the NADs to the party. Then, while the groups were feeling sad and lonely from the gang’s separation and from losing a member from each of their groups, Mr. and Mrs. ATP, followed by ATP Jr. and Sr. came over to the poor, lonely gangs, and demanded they have their phosphates back! So, the pitiful elements solemnly gave back all of the phosphates that they had taken. After this blow, the separated gang members, who were now sitting quietly in the cytoplasm hall of Cell-City, decided that they were going to recover, and so they each named their own group, “The Powerful Pyruvate!”

Once their wits were gathered, they decided to travel over to the Mitochondria Mall, for they had also heard that this place was full of all sorts of fun things to do. As they travelled towards the Mitochondria Mall, suddenly, out of nowhere, another car with a bunch NADs came flying past and they hurriedly asked if any Hydrogens would like to come with them to the big party. Then, one Hydrogen out of each of the gangs, hopped in with the NADs, and said, “I’m outta’ here!” Following this betrayal, a Carbon and two Hydrogens linked up and decided to head to the party and see if it was as much fun as everyone was saying. So, the poor, broken apart gangs were thinking things would never get better, when all of a sudden, a guy came up and asked if he could hang out with them. He said his name was Coenzyme A, and they were so happy, they decided to call their new club, “Acetyl Coenzyme A.”

The happy elements began to explore the Mitochondria Mall, when they stumbled upon the Krebs Cycle-Go Round. It looked so fun! They absolutely had to try it! So, they climbed aboard the exciting looking ride, preparing themselves for fun! As the ride began to move, a Carbon and two Hydrogens got sick from the movement, and hopped off the ride, planning to go and see what the party was like while they were waiting. As the ride started spinning faster, those horrible NADs swung by and stole a few more Hydrogens. The rest of the group was having too much fun to really notice, when a dude named FAD came by. Almost instantly, one of the Hydrogens became mesmerized by the new molecule of a man. She hopped off the ride and took off with Mr. FAD, hoping to never have to see the rest of the group again. When the ride was over, they did a head count, and to their surprise, each group had lost two Carbons, four Oxygens, and four Hydrogens!! Feeling quite distressed, they decided to name what was left of their group, “The Omnipotent Oxaloacetic Acid!”

After their new name had been proclaimed, they voted on what they were going to do next. Almost everyone wanted to go to “the big, important party” that had claimed so many of their friends. They finally found the place called the Electron Transport Chain. The whole place appeared like a big factory funhouse. Hydrogens were going in, ATPs and water were coming out! That’s where all the Hydrogens had gone! The whole thing was like a never ending chain of events, and so they decided to name this process Cellular Respiration. They told their story to all of the elements that wanted to go to Cell-City to warn them to stay away, and beware of NADs, ATPs, and FADs!!!!

Carley Thomas is 13 years old and lives in Decatur County, Indiana on a small farm with her two brothers and two sisters.  She loves riding horses, and is currently training a yearling filly that she hopes to be riding and showing in the spring of 2020 when the filly turns two.  She also enjoys playing hockey at the Columbus Ice Rink with three of her younger siblings, and likes to cook, sew, write, and paint.

To learn more about our Live Online Classes click HERE.