Train Up a Child 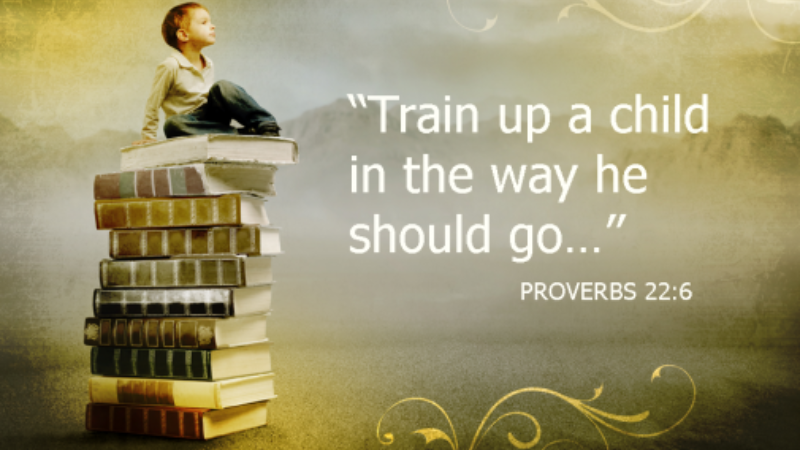 Many years ago, someone pointed out that the book of Proverbs has 31 chapters, making it ideal for a month-long Bible reading project. So I read one chapter a day for a month, and the experience was so rewarding I kept doing it, month after month for about a year, repeating the same verses as I was going through different issues in my life, to the point that at least some of them started to sink in.

Though some of the Proverbs went over my head, others were startlingly illuminating. “The mercy of the wicked is cruel” (12:10). Exactly! As we see in the whole continuing history of godless ideologies that win traction by promising compassion, empathy, and niceness, but end with varying combinations of gulags, tyranny, terrorism, and AIDS.

“He who is estranged seeks pretexts to break out against all sound judgment” (18:1 rsv). Exactly! That is why the most persuasive arguing - including Christian apologetics - often fails to change people’s minds. And why sin is the beginning of unbelief, as the sinner, wanting to justify himself, then comes up with all kinds of reasons why Christianity must not be true. (Other translations render the verse along the lines of the esv: “Whoever isolates himself seeks his own desire; he breaks out against all sound judgment.” The same notion is there, that a prior alienation gives rise to “breaking out” against truth, and that unbelief has its roots in the will.)

I kept finding a wealth of advice both practical and profound, telling me how to resolve conflicts and get along with people. I learned that I am to plan, make decisions, and take action, but that God, nevertheless, is the one who leads, determines, and establishes the outcome. “The heart of man plans his way, but the Lord establishes his steps” (16:9). “Many are the plans in the mind of a man, but it is the purpose of the Lord that will stand” (19:21). I learned that my own mind, apart from God’s Word, will lead me astray. Even if my idea seems to make so much sense. “There is a way that seems right to a man, but its end is the way to death” (14:12). And even if I am convinced that I am really a good person, that I am virtuous, that I reside on the moral high ground, “All the ways of a man are pure in his own eyes, but the Lord weighs the spirit” (16:2).

Not only the individual verses but the structure of the book of Proverbs conveys wisdom. Its purpose, according to the first chapter, among other things, is to give “knowledge and discretion to the youth” (v. 4). Though the wise too will “hear and increase in learning,” many of the proverbs take the form and context of the teaching that goes on within a family.

“Hear, my son, your father’s instruction, and forsake not your mother’s teaching” (1:8). And, indeed, it is all here, showing that not much has changed after all in the temptations and problems that teenagers face. Whether in the twenty-first century or the time of Solomon, “youth” must be taught to resist peer pressure (“My son, if sinners entice you, do not consent,” 1:10) and extra-marital sex (“Why should you be intoxicated, my son, with a forbidden woman?” 5:20). As are other traps such as drunkenness (20:1; 23:29-30; 31:4-7) and laziness (15:19; 19:24; 24:30-34), each of these temptations and the consequences of succumbing to them are explicated in vivid detail. As are the contrary rewards of faithfulness, such as the fruits of industry (13:4), the proper use of wine (31:6-7), true friendship (17:17), and the blessings of marriage, including sexual satisfaction (5:15-19).

All of these flow not from external restrictions or legalistic rules but from a living faith in the Lord: “Trust in the Lord with all your heart, and do not lean on your own understanding. In all your ways acknowledge him, and he will make straight your paths” (3:5-6).

Parents are to form their children - morally, spiritually, and in the pragmatic ways of how to function in everyday life. The book of Proverbs both teaches and models how this should be done, how to “train up a child in the way he should go” (22:6). This is what families are for. Culture, whose foundation is the family, is supposed to help.

Anthropologists tell us that the artifacts of a culture - its songs, stories, and works of art - help to convey the values of that culture to the next generations. Adults “enculturate” children. And those children, when they grow up, “enculturate” their children. If they do not, the culture will die out.

Conscientious parents trying to fight today’s trends must now deal with the phenomenon known as the “toxic parent,” one who does not try to “train up a child in the way he should go” but instead wants to be considered “cool” and so indulges the child, to the point of enabling his experimentation with sex, alcohol, and drugs. (Something to keep in mind when your teenager assures you that a parent will be chaperoning the party. Is this a Proverbs-type parent or a “toxic parent”?)

Today’s pop culture is unlike any other in history, in being driven by children rather than by adults. Us aging baby-boomers still tend to listen to the music that we listened to as children. Our styles and fashions and entertainment - and even, increasingly, what we do in church - are determined by what young people like. No wonder they have all become, literally, juvenile. In today’s topsy-turvy and increasingly infantile culture, Proverbs not only helps children become adults; it also helps adults become adults.