Churches, Castles and the Best Gelato in Germany 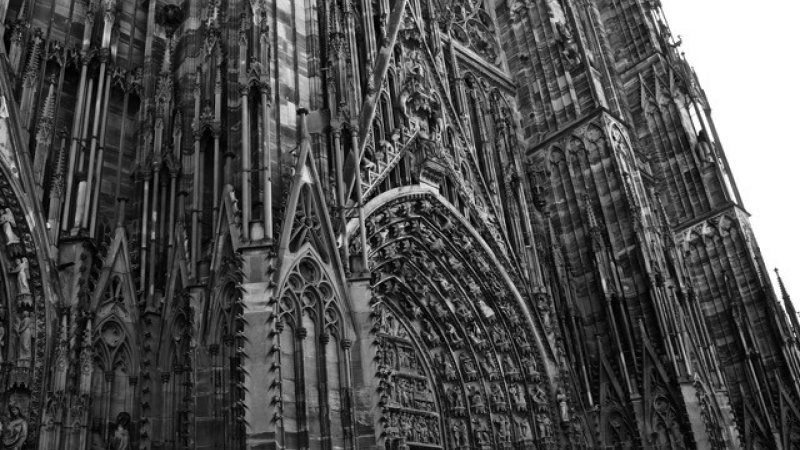 Standing outside The Frankfurt Hotel in Frankfurt, Germany, the smell of pollution, the noise of motorbikes and streetcars, and the general exhaustion from being in a bus for the past few hours was overwhelming. But not as overwhelming as the group of five or six gypsy women about 20 feet from where I was standing, screaming their heads off at each other. As Dr. Cannon walked over to where I was standing - and closer to the shouting match - I felt considerably less nervous since the brick wall that is Dr. Cannon was now in between me and what looked like an altercation that would inevitably break out into WWE Smackdown: Gypsy Edition. And it pretty much did. A couple minutes later, when one particularly infuriated lady ran away and came back with a broom above her head and started swinging it at every head she could see was about the time when Dr. Cannon ushered everyone inside the hotel.  “Welcome to Frankfurt!” the hotel manager cheerily exclaimed, as remnant screams from the catfight outside were still quite audible.

So now that I’ve got your attention, let’s talk about the 2017 Veritas 500-Year Reformation Tour. While every moment on the trip wasn’t quite as exciting (or violent) as the experience in Frankfurt, I think I speak for all my fellow students and participants on the tour in saying that this trip was one of the most memorable and enjoyable learning experiences of my life.

The first leg of the trip started in the JFK airport in New York City, where we all reunited with old friends, made some new ones, and got to know the people we'd be stuck with for the next 12 days. Many, many hours later, after experiencing top-notch plane food (not really) and exploring Heathrow Airport in London, we landed in Berlin. After spending the night in Berlin, we explored the sprawling metropolis and learned of its storied past. We walked through the Reichstag, the building which once housed the main legislature of the German state under the infamous Third Reich, and experienced breathtaking views from the beehive-like modern construction on top of it. Guided by the veteran Berliner, Edo, we went on a lightning fast tour of the Brandenburg Gate (once considered the most prominent symbol of the division between East Germany and West Germany), a Soviet memorial, a Holocaust memorial, and the Pergamon Museum of ancient art.

After our short time in Berlin, we transferred by bus to Wittenberg, a city in eastern Germany that is most famously where Martin Luther resided for much of his life. That night, after checking into the hotel, Mr. Shearer took everyone on walking tours (both before and after dinner) of Wittenberg and spoke on the history and significance of the city. The next day we stayed in Wittenberg and visited the Castle Church (where Luther posted his 95 Theses), the Town Church (another church in Wittenberg) and Luther’s home, which is now used as a museum to showcase the history of Luther’s life and career.

After Wittenberg, we spent a short time in Eisleben, Luther’s birthplace, and briefly visited St. Andrew’s Church, where Luther preached his last sermon. Shortly after this, we went to Erfurt, where Luther went to college and also joined a monastery. We visited a couple churches in the city, ate lunch at the Merchant’s Bridge (and had amazing ice cream) and toured around the Augustinian Monastery where Luther lived as a monk.

The next day we visited the majestic Wartburg Castle, where Luther was imprisoned after the Diet of Worms. Luther’s quarters are preserved in the castle, along with medieval art and a stunning mosaic. After touring the grounds at the castle for most of the day, we rode to Frankfurt, which was, needless to say, an interesting experience (flashback to the gypsies). After spending the night in Frankfurt, we drove to the Gutenberg Museum, which houses a working printing press and four original Gutenberg manuscripts. From there we traveled to Worms, Germany, where several members of our tour reenacted the Diet of Worms.

After our short stay in Frankfurt, the next leg of our journey began, as we crossed the border from Germany into France. We soon entered into Strasbourg, a quaint yet modern town in northwestern France close to the German border. Strasbourg contains traces of both German and French culture; in some parts, it feels like you’re in an old German town, and in others it looks and feels like a miniature Paris. We spent two days in Strasbourg; the first we were led on a tour of the city, saw the sights, tried the gelato, and visited the breathtaking Église St. Thomas, the massive church at the center of the town. The second day we ate breakfast in Strasbourg and took the bus to Zurich, where the Swiss Reformer Ulrich Zwingli lived and taught.

Our final day in Europe was spent in Geneva, the city where John Calvin resided for most of his life, from where he influenced the church worldwide. On our eleventh day, we woke at an unholy hour and boarded a plane for the U.S. We said our sad goodbyes, holding close new and growing friendships and magical memories of this European adventure. I’m extremely blessed to have been a part of it, and I’m incredibly grateful to not only the teachers and staff at Veritas who helped to make this trip a reality, but also the amazing tour directors, Ciarán and Peter, who helped to make this trip unforgettable.